✕
CM LP is back. Find out more* 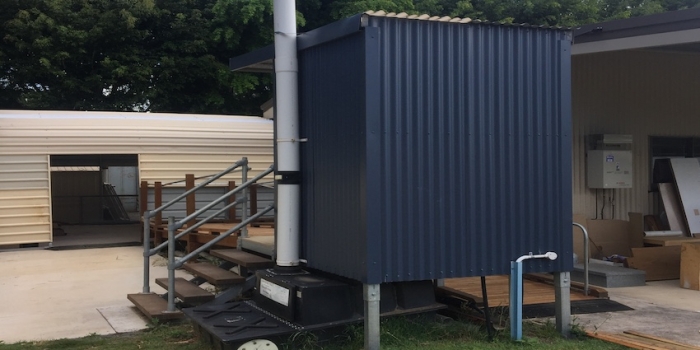 Recently Clivus Multrum heard that the Glasshouse Country Mens Shed was in need of a bathroom. If you’ve not heard about the Mens Shed movement, sit back, grab a coffee and give yourself 5 minutes to read up about it.

Mens Shed is a movement that has always been around in some form or another in Australia. Men have always tinkered and fixed stuff in their sheds, often with a mate helping out or learning how to do something. Mens Shed takes that tradition and puts it into a format that can be rolled out across Australia (and the world) to help bring men together in a safe environment to talk, learn and share stories.

When we heard that the Glasshouse Mens Shed didn’t have any bathroom facilities and it wasn’t plugged into the grid (meaning that getting water and power to a traditional toilet would be an issue), we offered to donate one of our CM8 units along with the building to go with it.

CEO Peter Vollert talks about getting involved with the project:-

“When we heard that the Glasshouse Country Mens Shed didn’t have any bathroom facilities we wanted to help. Our company Clivus Multrum donated a prototype CM8 toilet and building.

The great thing about this project was that we had a shed full of trained helpers and it was a great opportunity for the members to work together on a project that helps all of them.

With a host of trained members that are handy with a drill and hammer, the building and toilet was installed in no time at all – they even installed a ramp for accessibility for some of the older members.”

Moving forward, the Glasshouse Mens Shed now has a working bathroom that gives the men there another place to do their secret mens business.